Fraud against the NHS means that the money intended for patient care, and funded by the taxpayer, ends up in the pockets of those who did not legitimately earn it. It means fewer resources are available to be spent on frontline health services such as patient care, health care facilities, doctors, nurses and other staff.

Fraud, bribery, corruption and other illegal acts committed to obtain financial or professional gain, cost the NHS billions of pounds every year. In 2016-17 it was estimated that the cost to the NHS was around £1.29 billion per annum, as per the NHS Counter Fraud Authority, who assess that to be enough money to pay for over 40,000 staff nurses or to purchase over 5,000 frontline ambulances.

The Royal National Orthopaedic Hospital NHS Trust is committed to maintaining an honest, open and well-intentioned approach to best fulfil the objectives of the NHS. This means the Trust operates a zero-tolerance approach to fraud and bribery. Such conduct, at any level, is unacceptable.

The Trust ensures that there are effective controls in place throughout the organisation, including stringent policies and internal systems to prevent and detect bribery, in accordance with the Bribery Act 2010, and to counter fraud by ensuring compliance with the NHS Counter Fraud Authority Standards for Providers.

Fraud happens when someone makes a deliberate attempt to dishonestly make a gain for themselves or another, or cause a loss to another. This may include any person who makes a false representation or dishonestly fails to disclose to another person information which they are under a legal duty to disclose, or commits fraud by abuse of position, including any offence as defined in the Fraud Act 2006. Examples of the three main fraud offences are provided below. Further information can be found in our Anti-Fraud and Bribery Policy.

This is the most common type of fraud investigated within the NHS. This normally involves a false declaration being made

This could be relating to any information where there is a legal duty to disclose. For example, failing to disclose a criminal record or anything that could affect your DBS checks, such as working whilst sick. The staff member is being paid sick pay by the Trust, but is then being paid for secondary employment too, whether that is in the NHS or otherwise.

This is when someone abuses their position of authority against another person or their employer, for personal or financial gain, or to cause loss to another. Essentially, those who know how to use the systems, but ultimately abuse them too.

Bribery refers to the giving or receiving of an inducement, in return for a person committing an improper function. It is an offence to give or receive a bribe, or even offer or accept, even if the briber is never paid. A bribe is any inducement, financial or not, to encourage or reward someone to do something they should not do. The four main offences under the Bribery Act 2010 are detailed below. Further information can be found in our Anti-Fraud and Bribery Policy.

The types of fraud investigated in the NHS include the following:

Dos and Don'ts if you suspect a fraud

DO deal with the matter promptly if you feel your concerns are warranted.

DO NOT ignore it.

DO NOT approach or accuse individuals directly.

DO NOT try to investigate the matter yourself.

DO NOT convey your suspicions to anyone other than those with the proper authority.

What can I do?

The first steps are being aware of the risk and remaining vigilant. You should also know how to report any suspicions or concerns you may have about fraud and/or bribery.  The Royal National Orthopaedic Hospital NHS Trust contracts RSM to provide the Trust’s Counter Fraud service.

All referrals/discussions will be dealt with sensitively and in a professional and confidential manner.

The Local Counter Fraud Specialist also looks to protect NHS staff and patient’s outside of the NHS in our everyday lives, and so are sharing from the Metropolitan police website, the recent 5th Edition of the ‘Little Book of Big Scams’, which covers the most common fraud scams circulating today. 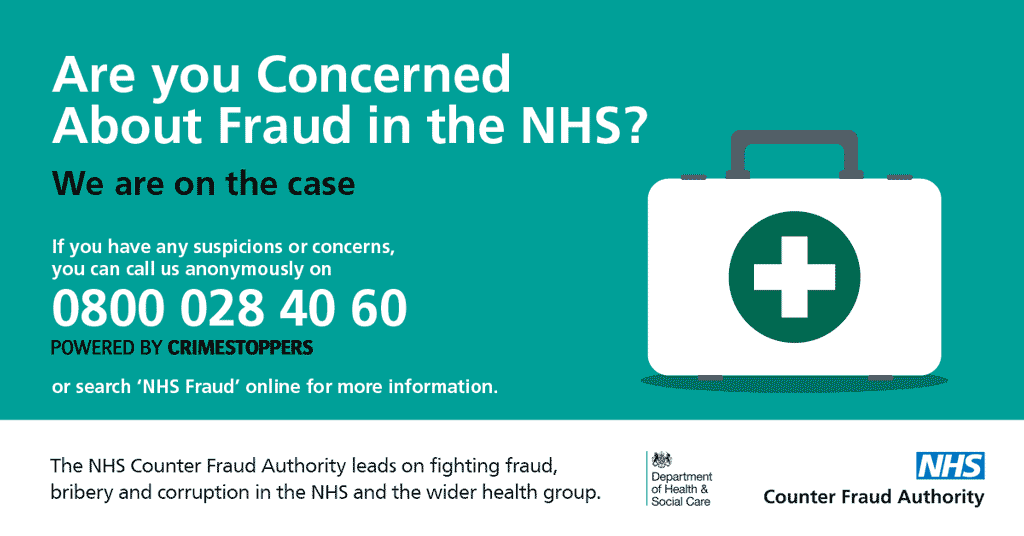