Since its establishment and successful launch in 1998 by Professor George Bentley and his team, the RNOH has established itself as one of the leading centres in the world for repair of damaged knee joints by cartilage cell transplantation (Refs 1 and 2).

In that time, over 1500 patients have been treated with a high success rate of 70 to 80% resulting in relief of pain and a restoration of function as well as delaying the onset of severe osteoarthritis, which would require knee replacement surgery.

Furthermore, the unit has produced important data on cell-engineering of cartilage by the publication of 30+ papers in the scientific literature in the overall quest to prevent - as well as treat - osteoarthritis of the knee, which affects 25% of people over the age of 50.

The surgical procedure was performed in two stages (Ref. 3); the first being arthroscopy (telescopic examination of the knee) to take a small piece of normal cartilage which is cell cultured. This cartilage is cultured for four to six weeks so that the cells are increased 30 times in number. These cells are then transplanted back into the damaged area of the knee by arthrotomy to grow and develop a new cartilage surface. 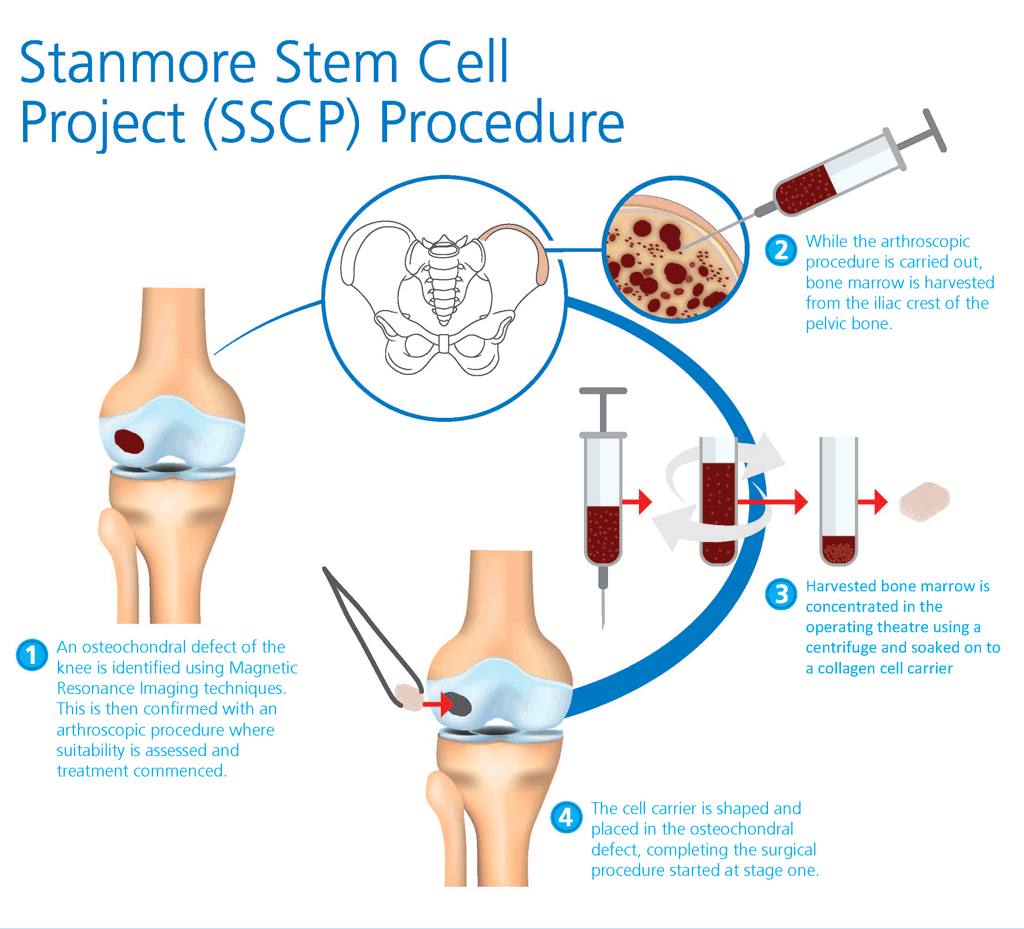 The method has proved very valuable in relieving pain and restoring activity in younger patients, as shown in a study of the first 800 patients (Refs. 4 and 5). However, it requires two operations as well as the rehabilitation period before full activity is restored, taking some 12 months.

Recently, other techniques involving the patients’ own stem cells have been shown by Italian research teams to produce similar results. The advantage of their method is that it requires only one operation and the rehabilitation period may be shorter than 12 months (Ref 6).

This technique, which is now being employed with modifications at the RNOH, is performed in one stage only by a technique in which the cells for transplantation are taken from the patient’s own bone marrow in the pelvis. These cells are centrifuged to select the precursors of the stem cells which, when transplanted back into the damaged knee joint, will give rise to new cartilage cells and repair the defect.

Our experience, together with reports from the literature, have suggested that the rehabilitation period back to full activity could be shorter than 12 months and therefore a more rapid rehabilitation programme is being followed which is controlled by MRI (Magnetic Resonance Imaging) of the knee. This may show that the knee is healed sufficiently after only six months.

The RNOH staff involved are:

Anyone wishing to be considered for the treatment requires GP referral via the NHS e-Referral service to the Joint Reconstruction Unit at the RNOH.